Posted by golfkat on October 23, 2018
Posted in: Cultures, Food, Travel. Leave a comment

One of my favorite places in the world is Penang, Malaysia.  It is a little island off the coast of Malaysia.  We were introduced to Penang by friends we met on the nearby island of Langkawi many years ago.  Jason and Chun were in the internet room (remember those?) with me, as we started talking.  A long conversation ensued, and we invited them to join us for dinner that evening on the terrace at the fabulous Datai.  We would never have discovered it but for their strong endorsement.

They told us about their home, in Penang, and that we should visit on our next trip to SE Asia.  Needless to say, we ended up visiting twice, and had the time of our lives.  We found out they really do have the best food in the world, and we got to experience the fabulous Rasa Sayang Hotel, one of the best places we have ever stayed.  We had our own butler, our tub was out on the balcony, and we enjoyed high tea every day at 3pm.

Many of you probably have never heard of Penang, unless I happened to mention it to you.  Penang is located only 8.4 miles from the mainland of Malaysia, connected by a toll bridge.  The Penang Strait separates it form peninsular Malaysia. Flight time from KL airport is about an hour.

The island is home to 1.75 million people, despite its size of just 405 square miles.  Its major city, Georgetown is Malaysia’s second largest city after KL.  Georgetown became a trading post back in 1786, when it was founded as a trading post for the British East India Company.  It became a British crown colony in 1867.  They gained independence in 1957 from the British Empire.  Lately, Penang is known as Silicon Valley east for its industries.  In fact, Penang has the highest GDP per person of any Malaysian state.

The three main races living here are Chinese, Malays, and Indians.  Penang island consists of five main areas.  Georgetown is the capital and city centre.  We stay to the north in Batu Ferringhi, a narrow sandy beach area with resort hotels and high end residences.  One of the great attractions is the Batu Ferringhi night market, both retail and food stalls abound.  This is where we have experienced some of the great street food stalls of Penang.

Probably one of the most famous people from Penang is the shoe designer, Jimmy Choo.  The five most famous food items that are must haves:  Char koay teo 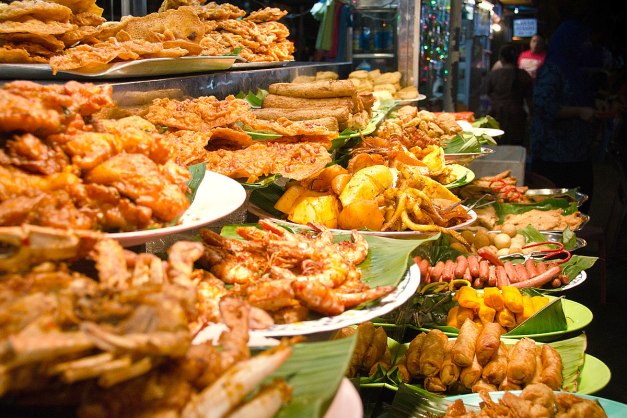 So, what is it about Penang that is so appealing?  One, it is an island that seems consumed by food.  And two, our friends, Jason and Chun know the island so very well.

We would be hard pressed to find better food than we just consumed in KL.  But this is Penang.  See you there!!

Haha, fooled you.  I included Spam just to find out if you really read my emails.