What Do You Think About When I Visit Cambodia?

When I first listened or watched to the news and heard Cambodia, Pol Pot, the Khmer Rouge, and genocide, it made me sick.  They ruled Cambodia from 1975 to 1979, and were autocratic, xenophobic, paranoid, and repressive.  The genocide was part of their social engineering.  The resulting deaths from diseases like malaria, and the Khmer Rouge’s ethnic cleansing, for lack of a better word, took its toll on minorities and the less fortunate.

Fast forward to about 2004, on our first trip to SE Asia, specifically in Bangkok.  We were eating at a little noddle stand in a small grocery store in Bangkok when we struck up a conversation with another American.  He stated, matter of factly, that Angkor Wat in Siem Reap, Cambodia was the greatest, most interesting place he had ever experienced.  While we had a set itinerary on that first trip, we kept this thought foremost in our minds on our second trip to SE Asia, in 2006.

Needless to say, the man we met in the noddle shop was right.  Most of you know I hold Angkor Wat and the entire Angkor complex as the best place I have ever visited, along with the Amazon rainforest.

But what about Siem Reap, and Cambodia in general, make it so special.  As always, it is the people.  Our first guide, Roath was the perfect guide, taking us through the most famous sights, leading us to great places to eat, and shop.  We remained email friends, and upon our next visit, we had dinner together.

It turned out to be an unexpected experience for all of us, me, Sheri, and Roath.  We invited her to have dinner with us at our Sofitel Hotel’s French restaurant, Mahout’s Dream.  The photo above was taken at this very dinner!  Little did we know what was going to happen.  They obviously did not enjoy the fact that one of their own was able to dine in a restaurant that locals cannot afford.

Somewhere during our dinner, she mentioned the reason why the staff was not very nice (though not rude) to her.  While very upsetting at first, I tried to understand why she was treated so poorly.  She mentioned they thought she did not belong there.  She learned English to make herself a better living, as a tour guide, and they were stuck working lowly jobs in a big hotel.

Moving on to the rest of our trip, I tried to keep this little dinner experience in mind.  When I made friends with a young man in the hotel’s dining room, he explained some of the problem.  The Khmer rouge tried to eliminate much of the middle class.  And only recently, was the country able to rebuild the middle class, through education, better jobs, and rebuilt infrastructure for tourism.  He said learning English was they key to his ability to get a job at the hotel.  And that the country is trying to rebuild the middle class, vital to their future stability and growth.

Yet, when we made our way to the downtown area, we saw and experienced many disheartening events.  Our guide told us of young girls who sell their babies for as little as $50 USD.  We saw hundreds of school age children begging on the streets, instead of attending school.  We saw street vendors forced to place their wares on the dusty soil of the downtown streets.  We saw open sewers running along the unpaved streets, and beggars and street musicians who lost limbs due to land mines.

Through it all though, we saw hope.  These people were not about to let their circumstance in life get them down.  They were doing whatever it takes to exist, to support their families, to make a new life for themselves.  It sounds like a cliche’, but this was the reality in Cambodia almost two decades ago.  It will be interesting to see it now.

Based on what I see, read, and observe, Siem Reap has turned into a real touristy town, with a street now called “Pub Street” in the downtown core area.  I see this as both good and bad.  Yes, they have come a long way from the repressive Red regime.  But do they really want to have a reputation for rowdy, all night bars and clubs that attract the “wrong” kind of tourists?

As far as the little “ma and pa” souvenir and craft shops?  My guess is that the newer mega stores are all Chinese owned and supplied.  Some of the employees might be locals.  We always tried to patronize the locals on past visits.  Hopefully, my friends here can shed more insight into the recent incursions.

But I digress, as often I do when thinking about the wonderful people in Cambodia.  On this trip, we will get to not only renew our friendship with Roath, but also meet her new husband, and two children.  I have a feeling I will not have much time to drink cheap, cold beer down on Pub Street in the downtown area.  Yes, we will visit Angkor Wat, Ta Prohm, and Bagan, my three favorite temples in the Angkor complex.  But I am sure we will find plenty of time to just talk, hang out, show them a few photos of Sheri and Lexi, and learn more about their lives in Siem Reap.

BTW, Siem is now over one million people, the roads are now paved, and they have three night markets. 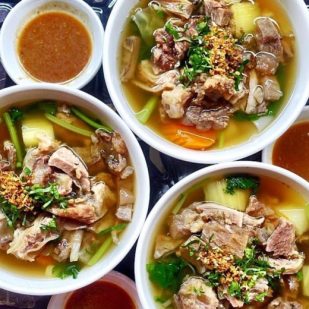 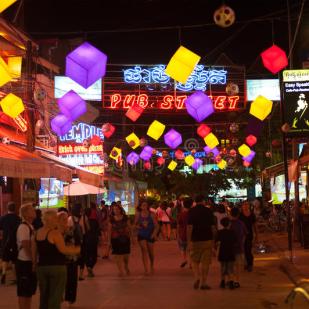