Can you believe this?

We have driven through parts of Vietnam, from Hanoi to Halong Bay, for instance.  And a few other side trips on previous visits.  They drive crazy here, needless to say.  Three cars wide on a street made for two is quite common.  And they can pass you on either side!!  And much like Rio, they love to use their horns.

Tips to avoid being robbed in Vietnam

*   Phone: Don’t listen to your phone when you are on the street. If you need to listen to a phone call, you should choose a corner and listen to it. Be careful when using your phone on the street as well.
*   Bag: I suggest to use a cross-body bag. The robbers have skills to take other bags really fast.  Be careful, and leave your necessary things in your accommodation if you don’t need to bring them outside.

This advice applies to almost everywhere, by the way.  Even back home, you should be careful!

Even Peter Piper shows up in Hanoi.  Pickpocketing can happen anywhere, anytime. A women’s father got pickpocketed twice when they went to a festival together. It happens a lot in crowded places.  Take care of your own things. and always put money in your front pocket, not in the back. Check it from time to time to make sure it is still there.

Now, I seriously wonder if I should send this in an email from a country stuck in a time warp among a dictatorship, emerging democracy, burgeoning capitalism, and brutal totalitarianism.  But I must repeat a story from our first trip to Hanoi, back in 2005.

We, me, Sheri, Mike and his son Matt, were sitting in the primo window dining table at then famous Bobby Chinn’s Restaurant in downtown Hanoi.  As we progressed through our meal, even meeting famous Bobby himself, we noticed a continuous commotion outside the restaurant.

A team of traffic police were impounding vehicles, mostly motor scooters, for what appeared to be either lack of proper registration or in the case of cars, illegal left hand turns.  The scooters were impounded and placed on a nearby flat bed truck, as the unlucky victims were sent walking away, in both embarrassment and confusion.

As cars were impounded, we noticed the driver of the cars, usually a nice Mercedes or similar car, would get out, stand next to the presiding officer, and slip him some cash.  Soon thereafter, the driver, his car, and passengers were off to a merry evening of fun and food.  This story kept repeating itself through the evening.

The moral of the story:  If you break the law, it is best to have some cash!!

Most of you know the real danger in Hanoi involves those motor bikes.  They outnumber cars about fifty to one during most of the day, including rush hour.  The secret to crossing the street, where there are no signals or crosswalks, goes as follows.  Pick and path, and just walk in a steady straight line, without looking up, stopping or pausing, for any reason.  I know, it is a tremendous leap of faith, but it works!

The second danger, maybe it should be first: taking a ride on one of the many motor bikes.  The drivers pester anyone who is walking, offering fast and cheap rides to almost anywhere, including “sightseeing.”  We have done this on several occasions, and enjoyed it, despite the danger.  Often, they hand the passenger an old, shoddy helmet for safety purposes.  It makes for a rather comical scene.

They take off in a blaze, and seem intent on being the first motor bike at every red light in Hanoi.  The love to zip in and out of traffic, ride onto sidewalks and walkways, in daredevil fashion.  They seem safe enough, but I really wonder what would happen in the event of an accident.

Other than that, Hanoi is a charming place, in some sections, seems like a little bit of France.  In others, it feels like deep in SE Asia.  But wherever you go, just beware of your surroundings, do not make illegal left hand turns, and watch your wallet!

The lines on the roads mean very little.  The stop signs are non-existent.  Traffic lights are about 70% effective.  Nobody signals,  Nobody looks both ways.  It is controlled chaos, makes our traffic back home look like kids play.

Last night, with three of us being driven on mot 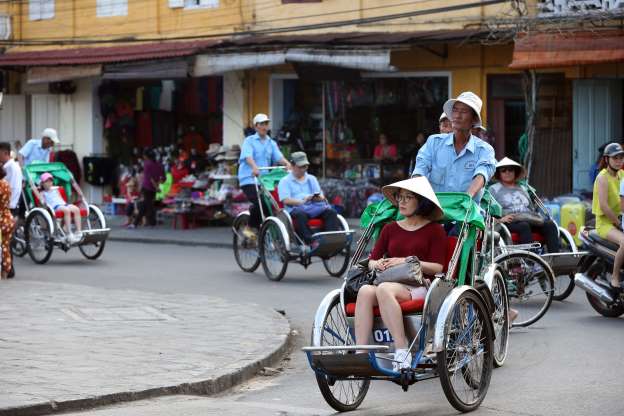 os by “hired guns”, we felt safe, though we had some close moments.  But there are 6 million motos in a city with 8 million people.  Citizens simply cannot afford a car, as a moto is around $1000 USD.  It is also quite easy for a cyclist to keep up with motos, as well as most cars, due to the heavy traffic, and craziness.