Fun Fact:  At 1,626,000 square meters, Angkor Wat is the largest religious monument ever constructed. The entire ancient city was built with 5 to 10 million stone blocks, more than all the pyramids of Egypt combined. And I consider it the most impressive place, along with the Amazon rainforest, I have ever been.

Those of you who read my emails know that the Angkor complexes are one of my two favorite places in the world.  This is my third visit here, having been here twice before with Sheri.  And on our first visit, Mike and his son Matt, who are on this trip with me, were also here.  This visit is about renewing friendships, meeting the husband and children of our friend Roath, and less about sightseeing.

From their website:  Angkor Wat is the most famous ancient temple site in Cambodia. Visiting the ancient Angkorian temples is the reason most visitors come to Siem Reap. With its five lotus-like towers rising 65 metres into the sky, it is an awe-inspiring sight. This UNESCO World Heritage site was once the largest pre-industrial city in the world. It remains one of the world’s ancient wonders and is a must-see for any visitor to Cambodia.

The temple ruins are what remains of the ancient Khmer Empire. The empire encompassed much of Southeast Asia from the 9th to the 13th century. It dominated the area of present day Cambodia, as well as a lot of Thailand, southern Vietnam and Laos. At its zenith, more than a million people lived in the capital city at Angkor.

King Suryavarman II built Angkor Wat in the early 12th century, at the height of the Khmer Empire’s power. Scholars disagree on whether it was meant as a state temple or a funerary one. The name translates as “City Temple” and it reportedly took some 50,000 artisans, workers and slaves to complete. It is still the world’s largest religious building, covering 162.6 hectares. It was first dedicated to the Hindu god Vishnu, but became a Buddhist temple in the 14th century.

Some facts and features:  The temple is about 1 km square and consists of three levels. The exterior wall surrounding Angkor Wat measures 1,300 metres x 1,500 metres. Bas-reliefs and carvings cover almost every wall of the temple. Those on the exterior walls of the lower level are especially remarkable.

There are carvings of almost 2,000 Apsaras (celestial dancers). These inspired the revival of the Apsaras Dance in Cambodian culture. Other carvings show scenes of wars, everyday life and Hindu legends. The south wall shows scenes of heaven and hell. Depictions of the Hindu ‘Churning of the Ocean Milk’ are on the east wall.

The main tower on the third level contains four Buddha statues. Each statue faces a different point on the compass. Paying respect to these statues is said to bring good luck. The stone structures seen today are only part of what used to exist at Angkor.

There was also an enormous city of wooden houses, markets, shops, palaces and public buildings. Angkor was abandoned after being sacked by Siam (now Thailand) in 1431. The French government established the Angkor Conservancy in 1908. They were first to restore the temples of Angkor Wat, Bayon and Ta Prohm.

If you were to ask me where the best place to visit in SE Asia, make that in the entire world?  Yes, Angkor Wat in Cambodia!!

By the way, it is off season here, as we were one of only two tables at nearby The Champagne restaurant in a very upscale boutique hotel, even nicer than ours.  And it is so hot, even at night, as it was a THREE shower day. 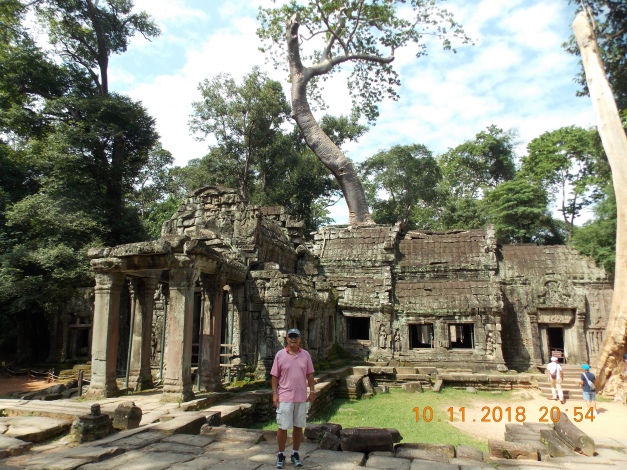 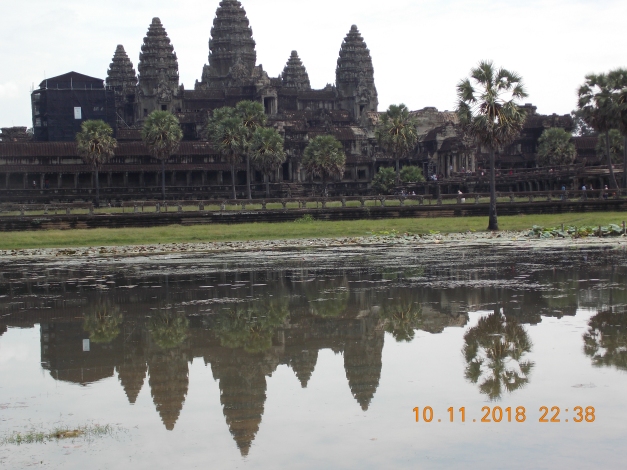