Just for fun, we are driving up to Yosemite today with Lexi.  Most of you have been to the most magnificent of National Parks.  And all of you know the close ties to Yosemite that famous naturalist, John Muir had with Yosemite.  But did you know that another famous name is linked to Yosemite, that of Chiura Obata (1885-1975), who came to the U.S. in 1903 (seven years after my grandfather)?

Mr. Obata left Sendai, Japan at the tender age of 18 (my grandfather was 16 when he arrived).  Trained in sumi-e (ink) brush painting, America was just a stop (so he thought) along the way to Paris, the hotbed of artistic creativity at the time.

He became homeless after the 1906 San Francisco earthquake, but he kept painting.  He met his wife, Haruko, started a family, and settled into San Francisco’s Japantown.

From Berkeleyside (Lou Fancher):  California in the early 20th century offered an odd embrace to Japanese immigrants: holding them at arm’s length with national legislation like the 1924 Asian Exclusion Act, prohibiting them from becoming American citizens and simultaneously, at least in San Francisco, mesmerized by, and adoring of, decorative Japanese art. Obata received a number of significant commissions (creating sets for San Francisco Opera’s production of Puccini’s Madama Butterfly being just one example) and participating in group shows as part of the East West Art Society, an artists’ association he helped found.

More Fancher:  It was a 1927 trip to the Sierras that launched his decades-long love affair with California’s landscape, and Yosemite in particular. Perhaps he recognized a kindred spirit in the area’s atmospheric and rugged landscapes. After all, the terms describe his homeland — fog rolling through sheer inclines; vivid mountain lakes and towering waterfalls; organic outbursts of nature in the form of sturdy flora improbably springing from rocks.

Long story, short, after a stint owning an art store in Berkeley, they were shipped off to first, the horse stalls at Tanforan Race Track, then Topaz, Utah to relocation camp a the outset of WW2.  But in true passion and fashion, he established art schools, and had over 3000 students enrolled in his Topaz art school.  “Even in the harsh climate and conditions at Topaz, he looked across the wide Sevier Desert to Topaz Mountain and later wrote: “If I hadn’t gone to that kind of place I wouldn’t have realized the beauty that exists in that enormous bleakness.”

But it was Mr. Obata’s passion for Yosemite that affected him like it did for John Muir, Lucy Parker, and Carlton Watkins.  They were all entranced by the power that Yosemite has over people.  His first visit to Yosemite was in 1927 (the same year Babe Ruth hit 60 homeruns), where he spent the summer.  He produced over 100 sketches and ink paintings in six weeks.  His first exhibition was the following year in 1928.

Beginning in 1930, he had numerous successful exhibitions in California, including one in 1931 at the famous California Palace of Legion of Honor.  Then, in 1932, he became an art instructor at U.C. Berkeley.  Forced to sell many of his paintings and wood blocks prior to his incarceration to Topaz, he donated the profits to establish a scholarship for a student, regardless of race or creed.  Even UC President Robert Gordon Sproul offered  to store many of his remaining works.

Above, I have included just three of his famous works.  I strongly encourage you to view his work, on the internet, at the library, or buy one of his books (as I did).

So, on this particular trip to Yosemite, along with Sheri and Lexi, I will keep an eye out for the ghost of Mr. Obata.  And hope that I can imagine what he thought about this magnificent place in 1927. 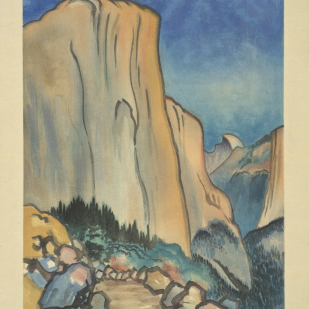 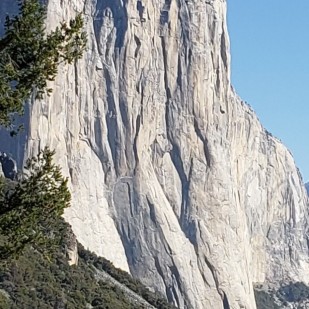