Posted by golfkat on January 3, 2019
Posted in: Action, Cultures, Sports. Leave a comment
When I say habit, I am not taking about the attire for a nun or a burger chain.  I am talking about a set schedule for exercise, of specific duration, and intensity.
Most of you know I am a dedicated cyclist, at least three to four times a week, sometimes more.  I have given up golf, tennis, snow skiing, and jogging over the years.  During the cold weather months, I have become a spinner, with spin class on Monday, Wednesday, and Friday, for 90 minutes.  I make sure I ride the equivalent of at least 20 miles, and burn at least 500 calories.
So, how did it become a habit?  For one, I enjoy outdoor exercise much more than indoor.  I have never been a gym rat of any kind or color.  And another factor is age, as high impact sports are not good for the joints.
First, try it for at least a month.  Join a gym that will give you a month to try it to see if you stick with it.  Hopefully, in those four weeks, your gym attendance becomes a habit.  There are no magic number of days, just hope that it becomes a habit.
Second, try bundling.  What is bundling?  Combining an activity like your favorite TV show with some spin, treadmill, or elliptical.  I began going to the gym before I retired, when I particularly enjoyed watching CNBC in the early morning before the stock market opened.
Third, set some goals.  Just make sure they are realistic, and not always tied to weight loss.  I chose my spin class goal based on calories burned, time, and distance.  When I am riding my bicycle, I try to ride for at least 90 minutes, and cover from 25 to 30 miles, on average.  And I try to an increasingly longer ride each week.
Fourth, be flexible, though people who exercise at the same time each day traditionally form better habits. And it is the ONLY time they work out.  I choose the early morning, to free up the rest of the day, and prefer to ride my bicycle when it is cooler.
Fifth, become more social.  Exercise with friends.  I have made such great friends, both cycling and in the spin class.  My cousin goes to the gym 364 days a year (only Christmas is missing gym closed?).  Or join a class with some of your friends or work mates.  My sister in law walks twice a day during her breaks at work with some others in her office.
Sixth, make it worth some kind of reward.  After a few months, you will forget about the reward.  But it might be important in the early part of creating your routine.
See you on the healthy side of 2019!!!! 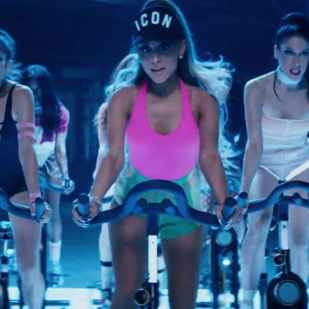