Posted by golfkat on January 24, 2019
Posted in: Cultures, Food, Hobbies. Leave a comment

This year, we made over 400 pounds of sausage, including Italian, German, breakfast, and chorizo.  Here is the original story about our sausage making adventures.
This was written a few years ago, but the process is still the same. We boned and sliced the pork yesterday (Saturday). We have a total of about 260 pounds of pork ready to grind, flavor, mix, and encase. It is a day I look forward to every year. This will be my first while actually living here in the great San Joaquin Valley.
Most of you know by now that I have an annual sausage making party with my brother, Bob, and a friend of his in the Fresno-Sanger area, Doug. We make anywhere from 180 to 200 pounds of homemade Italian style sausage. Doug has a sixty by sixty foot industrial strength kitchen behind his home, in a large shed. He can also seat about 100 people in front of a big screen for parties and Super Bowls. He has all of the latest, industrial strength equipment to make all kinds of food, including our sausage. He is well known in the area for his food preparation, cooking, baking, and Armenian specialties. He even sold some of his specialty foods to the mother of famous attorney, Bobby Kardashian, before he passed on.

The traditional definition of sausage is food made from ground meat, in our case pork, with spices, salt, and herbs, in a natural animal casing. Our sausage will not be smoked, cured, dried, or otherwise adulterated. In 589 BC, the Chinese were the first to make sausage, consisting of goat and lamb. Homer mentioned blood sausage in the Odyssey. The most famous sausage was from Italy, of course. The variety, called lucanica still exists in a variety of modern sausage from the Mediterranean.

Sausage casings are traditionally made with cleaned animal intestines. Today, most natural casings have been replaced by collagen, cellulose, or plastic casings. We use the real thing! Some meats are prepared without casing, such as lunch meats, or meats in cans or jars. The most basic sausage consists of meat cut into pieces or ground. We use pork, and limit our fat content to about ten to fifteen per cent. We do not use any filler. But Doug has a fantastic method of flavoring (secret recipe) the meat with herbs, spices, and just the right amount of water.

Every country seems to have their own version of sausage. Most are classified by the region of their origin. So, since we make this sausage in Fresno, San Joaquin Valley, we need to come up with a good name. Any ideas are welcome. Of course, the laws in each country dictate the contents, methods, and preservation techniques allowed. Traditional Italian sausage is made from pork, along with fennel seeds, chili in the South, and black pepper and parsley in the North. Only Doug knows the exact formula, as he mixes the spices and herbs, like a mad scientist, before we get there. Last year’s spice formulation was a little “hotter” than years past. We are not governed by any laws, but nobody has ever gotten ill from our sausage.

Ours is a labor of love, and a fun way to spend the day with my brother. It takes the better part of half a day, with an early morning start. We begin by boning the pork and cutting it into one to two inch chunks or strips (yesterday). Next, we place it in his huge meat grinder. Then the mixer where we add the spices. From here, we thread the casing machine and use the auto filler to place the meat inside of the casing. As it comes off of the feeder, Doug or my brother wind it into spirals. After this is done, we place a “roll” of sausage into plastic vacuum sealed packages, ready for freezing. We also make about four to six dozen one pound patties, for use in sauces and chili, or just plain breakfast sausage and sandwiches.

About mid way through the process, we cook a batch of sausages, along with onions and peppers. Then we steam the rolls on top of this mixture. We must “test” the goods before too much of the day is gone. We have also made their beans and sausage, Mexican style, in years past, as a prelude or warm up act to Saturday’s sausage making party. And maybe a beer or three.

Without bragging, ours is the best I have ever tasted. Doug actually sells limited amounts to Fresno area restaurants and caterers. I generally do not eat a large amount of Italian style sausage. I enjoy giving some away to dear friends. 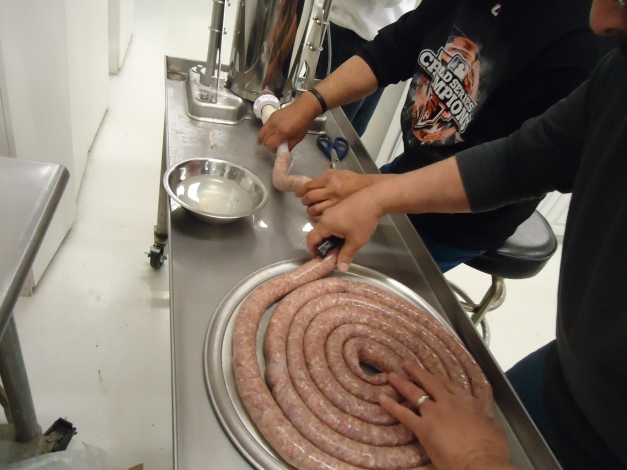 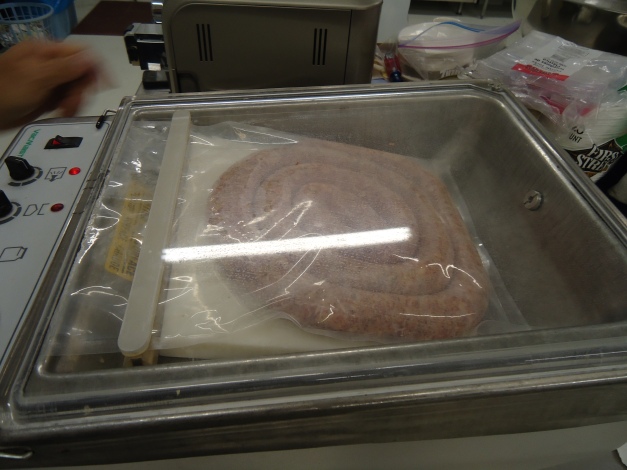 But I know that ours is made with good fresh ingredients, handled properly, and made with great care. Many of you have tasted this sausage in the past. And hopefully, many of you will taste it in the future. It is the best, Gerry, the best!!!!!