The van Gogh, My Favorite Museum

Posted by golfkat on May 6, 2019
Posted in: Cultures, Entertainment, Travel. Leave a comment
The Van Gogh Museum in Amsterdam houses the largest collection of the most popular artist in the world.  Each year, 1.6 million people visit, making it one of the 25 most popular museums in the world.  In addition to visiting the Amsterdam museum, I have seen his works on tour twice, once in San Francisco at the de Young Museum, and once in Los Angeles, and the Los Angeles County Museum.  Neither California exhibit was enjoyable due to the density of the crowds attending even though we were assigned time slots for entry.  The only way to really see and appreciate his work is to visit the Van Gogh Museum.

The crowds were much worse than this!!!

Is this not more preferable?

The museum has over 200 paintings and 500 drawings, as well as some work by other famous artists.  The building itself was designed by Gerrit Rietveld, but completed in 1973, after his death.  And an eye-catching elliptical wing was added in 1999, designed by Kisho Kurokawa.  It is located in Museum Square, between Stedelijk Museum, Rijksmuseum, and the Concertgebouw.  And most fortunately, I was able to visit all three.

Most people do not know that the vast majority of his works passed quickly from his younger brother, Theo.  He died just six months later, leaving his widow, Johanna van Gogh-Bonner his collection.  It passed on to her son, Vincent Willem van Gogh in 1925. Then it was loaned to the Stedelijk Museum, and ultimately the van Gogh Foundation in 1962.  It was housed in a temporary museum until the permanent museum was completed in 1973.

I did not remember that in 1991, twenty paintings were stolen.  They were recovered 35 minutes later in an abandoned car.  Four men, including two guards, were convicted and given six or seven year sentences.  In 2002, two more paintings were stolen, and never recovered, though the thieves were caught and convicted. 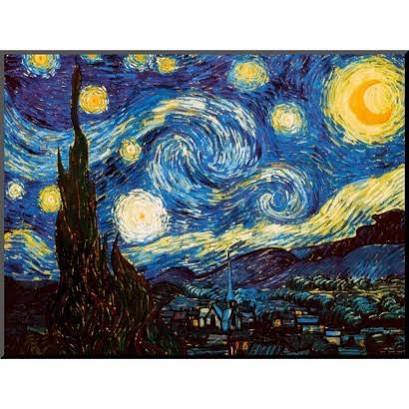 Perhaps my favorite, painted in 1889, housed in the MOMA in New York, along with the song by Don McLean, named “Vincent”.  The view is from his asylum room St. Remy de Provence, just before sunrise.  And this is his best known painting.  He was prolific during his one year stay in the asylum, which catered to the wealthy.  Van Gogh had a second floor bedroom, but a ground floor painting studio.
Brilliant, yet unstable throughout his career, he was poor, mostly unknown throughout his career, and hindered by his mental illness.  Perhaps it sounds like the story of many struggling artists.  On July 29, 1890, at the young age of 37, he died from a self-inflicted gunshot wound.  He was fluent in English, German, French, and his native Dutch.  He loved English culture and Dickens. He actually taught in a boys school, and even preached to the congregation.  He was attracted to troubled women.
Also unknown to many, his brother Theo actually offered money to Paul Gauguin, to keep an eye on Vincent!  The story goes that they had an argument, Gauguin left, Vincent went to a brothel.  He paid for a prostitute named Rachel, and then handed her his bloody ear.  The people in Arles went so far as to sign a petition saying he was dangerous.  He began painting while on the hospital grounds, and by November, 1889, he was invited to exhibit his paintings, including “Starry Night” in Brussels.
This museum is a must stop on the continent.  My favorite museum in the world!
I plan to make the Van Gogh Museum my first visit (yet again) upon arrival in Amsterdam.   In fact, this is probably my last visit to Europe.  I will tell you some more Van Gogh stories tomorrow!