Due In Court for Salem Witch Trials

Posted by golfkat on October 30, 2019
Posted in: Cultures, Entertainment, Travel. Leave a comment

A few years ago, in a land, far, far away. . . . .
Not Oregon and certainly not the cigarette, but Salem, as in Massachusetts is my destination.  Salem is a big tourist destination for the entire month of October for their Halloween festivities, and the witches.  Witches you say, perhaps due to the Salem witch trials back in 1692.  Even the cop cars here have witches as part of their logo.  The local high school team carries the nickname of “The Witches.”  And I would imagine that we have the Brits to blame for even thinking that witches exist.
Here is a quote from Salem’s website: No place in the world celebrates Halloween with such fun and magic as Salem, Massachusetts!  However, for some rather be-witching reason, their Halloween Parade is held on October 4!  Perhaps they will make amends since they have a 3-D haunted house, and a re-creation of the Salem witch hunts.  And the Salem Carnival will run through October 31.
And more:
Salem’s #1 rated Haunted Attraction! Savor famous Maine apple buns, kettle corn, and other treats. Open daily. Extended weekend hours.
That famous work of Arthur Miller, “The Crucible” describes much of this city’s cultural identity and its role in the famous Salem witch trials of 1692. Salem was founded in 1626 by Roger Conant and a bunch of his men known as the Old Planters.  After two years, he was replaced by John Endicott.  Do you remember studying these names back in grade school?  Conant, though often blamed for the Witch Trials, died over ten years BEFORE the Trials began!  The name Salem comes from “Shalom” or Peace earlier given in 1629.

Sure enough, we can blame the Puritans for the uproar in Salem. The most infamous trial was conducted by the Court of Oyer and Terminer in 1692.  A total of nineteen were hanged, with one “pressed.”  Five more died in prison, and another fifty were imprisoned.  It stands as one of the most notorious examples of mass hysteria, along with McCarthyism, and War of the Worlds.

I hope I find none of that.  I hope I find some friendly and beautiful witches, or maybe the one who test drives the brooms in the GEICO commercial.  The population of Salem numbers just over 40,000 people.  Congress designated the town as a National Historic Site.  Tourism is the backbone of the local economy, particularly around Halloween.  Even the old television show with Elizabeth Montgomery, “Bewitched” filmed a few episodes here in the 1970s.  From the 1990s, witch-related tourism grew significantly. 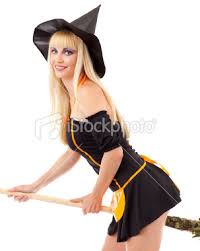 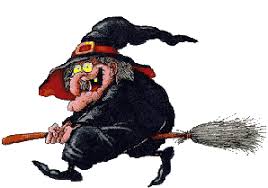 Witch One???
Among the landmarks are Nathanial Hawthorne’s birthplace, House of the Seven Gables, Gallows Hill Park, and The Witch House.  The most notable resident of our time is Jack Welch, former CEO of General Electric.  He grew up in Salem and attended Salem High School.  So, I shall see what there is to see here.  I am taking the train out here from Copley Square, after taking the red eye out here on Tuesday evening.
More:
SALEM, MASS. Is there a more fitting place to spend Halloween than a town where at least half a dozen attractions begin with the word “witch”? In Salem, beginning in 1692, dozens of people were accused of practicing witchcraft and 19 were hanged, according to the Salem Witch Museum.

For a tour of some of the more famous sites of murders and executions, climb aboard Salem Trolley’s Tales and Tombstones, a nearly hour-long ride at dusk during which passengers will hear of haunted hotels, ancient curses and ghost ships. Tickets: $20, $15 for 60 and older; $10 for children 6 to 14. Reservations required: (978) 744-5469; salemtrolley.com.

But this is hardly the only way to explore the town; you can see it by boat, foot, even Segway.

On the Haunted Harbor cruise by Mahi Mahi Cruises and Charters, passengers will learn about pirates, haunted lighthouses and monsters during an hour-and-a-half tour on a heated boat with a bar and grill, through October. Tickets: $25; $15 for children: (978) 825-0001; mahicruises.com.

The House of the Seven Gables, once owned by a cousin of Nathaniel Hawthorne, whose visits to the property are said to have inspired his 1851 novel of the same name, has live performances throughout October, including one that aims to transport visitors to the witch trials. Performances last 35 minutes. Reservations recommended: (978) 744-0991; 7gables.org.

At the Salem Witch Museum, visitors can learn about the trials and take advantage of extended hours for “haunted happenings” (some until midnight) through October: (978) 744-1692; salemwitchmuseum.com.

On Halloween, there will be music and dancing on stages around town, and fireworks over the North River at 10 p.m. Check out more festivities, including costume parties, performances and events with self-described witches and paranormal experts, at hauntedhappenings.org, festivalofthedead.com and witchescottagesalem.com.

There is a tropical storm, a polite name for a hurricane, named Sandy, headed to the eastern part of our country.  I may or may not alter my plans once I get to Boston later today (Wednesday).  Or IF I get to Boston.

BTW, it was a great trip.  I recommend Salem to anyone who likes Halloween and all the regalia that goes with it.