I continue to revise and update this email about corned beef.This was written a many years ago, but still applies today.  These days, we have our St. Patricks’ Day meal at home.  I actually enjoy preparing it.  It is one of the few meals I know how to prepare.  In years past, we had parties!  I think they have become extinct.

St. Patrick’s Day is the perfect time to have one of my favorite dishes, corned beef and cabbage.  So, aside from buying and preparing this dish, I wondered about the origin and history of corned beef.  The term “corned” comes from the large rock-salt kernels, or “corns of salt” covering beef in a crock.  This process preserves the meat.  The term has been in the dictionary since 888 AD.

Leave it to the Irish to be the largest exporters of corned beef, at least until 1825.  It turns out that corned beef and cabbage is not very Irish.  But corned beef certainly is.  The area of Cork, Ireland was a big producer of corned beef in the 1600s, until 1825.  It was sent in cans and was their chief export, sent around the world.  According to historians, the British army survived on canned corned beef during the Napoleonic Wars.

Corned beef and cabbage is essentially an American tradition on St. Patrick’s Day, started by Irish-Americans in the 1800s.  But traditional Irish feel that beef was reserved for royalty, since cows were prized more for their milk.  It was more common to celebrate a holiday meal with ham or bacon with their cabbage and potatoes.  When the Irish immigrants came over to America, they had to replace the hard to find bacon with beef.  They found that Jewish corned beef was similar in texture, so they began using it in their celebrations.

Abraham Lincoln’s Inaugural dinner was corned beef and cabbage. It was served with mock turtle soup and blueberry pie.  Somehow, I doubt President Obama would replicate this dinner, despite his fondness for the Lincolns.  But cabbage soup recipes abound for weight loss.  And who can argue with the fiber?  Only the folks at Benefiber or Metamucil.

Corned beef, called salt beef in the U.K. are types of salt cured beef products.  The three main types are 1) wet cured in spiced brine (brisket or round steak), 2)  dry cured with granular salt (various cuts of beef), and 3) canned, minced salted meat, oily and crumbly (made from various cuts of beef).

In the United States, corned beef is usually purchased ready to eat from delicatessens. It is the key ingredient in a Reuben sandwich.  And the best is served at the Carnegie Deli in Vegas and New York City.  Corned beef hash is commonly served with eggs for breakfast.  Smoked corned beef becomes pastrami with the addition of spice mix.  Most of us just buy the corned beef in a ready to cook preparation in the meat section or butcher counter.

St. Patrick’s Day in the U.S. centers around corned beef and cabbage.  It is not an Irish national dish as we are led to believe.  The closest Irish dish is Bacon and Cabbage.  But we do thank the Irish immigrants for substituting corned beef for the pork products.  New Englanders commonly add the root vegetables, like potatoes, carrots, and turnips. 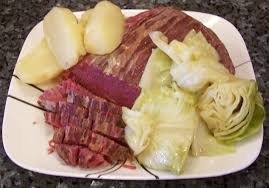 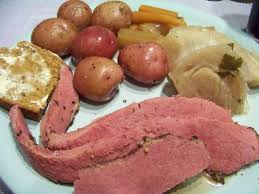 When cooking the corned beef, I prefer to cook the potatoes, carrots, and cabbage in a separate pot.  Otherwise, the oily liquid from the corned beef changes the flavor and texture of the other ingredients.  Then to top it off, skip the fancy mustard, and just go with old fashioned French’s yellow mustard.  Many people also prefer rye bread for sandwiches the next day.  The brisket must be cut cross grain or will be impossible to chew.

Personally, this is a meal I enjoy on St. Patrick’s Day, or for any other day when the weather is cool.  It is high in salt, but oh so tasty.  And all the food groups are represented.  A taste trio worthy of anyone, Irish or not.  Remember the Seinfeld episode where George Costanza finds the cured, salted meats to be an aphrodisiac?   Give me Carnegie Deli or give me something healthy to eat instead!

Enjoy yourself!!!   Have a Guinness, and forget about the war.

Update:  Pastrami is the quintessential Jewish deli meat found at New York institutions like Katz’s, which famously piles a whole pound of rosy, hand-sliced pastrami onto its sandwiches. But in the Bay Area, the options have been slim for high-quality pastrami outside of long-running Berkeley staple Saul’s Restaurant & Delicatessen and, more recently, Wise Sons. The scene started truly changing about two years ago, coinciding with the start of the pandemic.

The momentum has only picked up: San Francisco’s Castro neighborhood got a restaurant entirely devoted to pastrami last summer with Hot Johnnie’s, which puts a West Coast spin on it. North Beach’s Little Red Window dropped its empanada menu for a Jewish deli format last month. And now, Napa is getting ready to welcome Loveski Deli from Christopher and Martina Kostow of the three Michelin-starred Restaurant at Meadowood.

Other chefs see more obvious reasons for pastrami’s recent rise. Caris called it simply “the best deli meat,” while Matt Weinberger, general manager at Grossman’s, said it fits into larger pandemic-fueled trends toward comfort food. Pastrami also falls in line with California’s love of food preservation, said Loveski’s Christopher Kostow, and reflects how chefs are generally looking to the past for inspiration.

“It’s Jewish barbecue at the end of the day,” said Kostow, who is buying pastrami from a secret source for Loveski. “It’s delicious. It’s smoked. It’s spiced. It’s fatty. It’s the best of all possible worlds.”

Making pastrami is a labor-intensive, time-consuming process, and no chef in the Bay Area makes it the same way. Chefs trim the brisket, drop it in a salty brine, rub it with spices, smoke it, steam it until tender and then slice it to order. But there’s variation at every step that makes each restaurant’s pastrami special.

Caris describes his pastrami as traditional in the sense that he doesn’t inject the meat with brine to speed up the process — a shortcut common in industrial versions. But he takes liberties, namely keeping more fat on the grass-fed brisket than usual.

“We want it to be kind of like a prosciutto. The fat in our pastrami is super buttery,” he said, noting that he’s heard from some upscale restaurants that want to carry Pyro’s product. “It’s something you can throw on a charcuterie board.”

Pyro’s also takes an exceptionally long time to make pastrami — on average about 30 days, depending on the size of the brisket. Caris spends time every week agitating the brisket to examine the osmosis in action for an average brine time of 26 days. That’s because each brisket comes from a different animal with different densities, he said. There is such a thing as too long in the brine, though, resulting in pastrami that tastes aggressively cured and salty.

Corned beef and cabbage is one of the few dishes I know how to make!

(Thanks to the SF Chron for this pastrami insight)