The real Oktoberfest in Munich starts Saturday (Sep. 17)!!!  I really do not have the time to re-trace my travel steps, at this point in my life.  But this is one event that would be fun.

I see there are some places in the United States that celebrate the Oktoberfest, much like they do in Munich each year.  Of special note is the 200th anniversary of the Oktoberfest this year (2010).  It began on October 12, 1810 when Crown Prince Ludwig, who later became King Ludwig I of Bavaria, married Princess Therese of Saxony-Hidburghausen.  The royal festivities that followed have become part of this big yearly tradition.  It is now known over the world as Oktoberfest with over 7 million people, even though it begins in September (today), and ends this year on October 6 (a full 14 days later).

If there is one event in Europe to attend, that is a non sporting event, this is IT!  It is the biggest two week party I have ever seen or been a part of.  For the 200th anniveresary, special events will take place.  These include:  folk music, dance displays, and horse races that are meant to emulate the celebration of 200 years ago.  Most visitors, however, come for the festivities, including the fourteen HUGE beer tents.

The places in the U.S. are as follows:

Fredericksburg, Texas Hill Country  (Texans are worthy beer drinkers, at least as good as the Germans)

Catskills, New York (I have a hard time seeing this one)

Zinzinnati, Ohio (the largest Oktoberfest outside of Munchen)

Chicago, IL (St. Alphonsus Church with music by the Bratwurst Brothers and the Polkaholics) 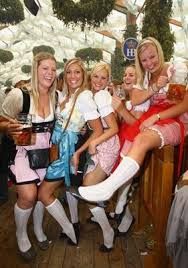 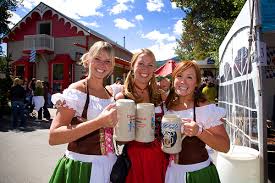 First, the beer is without peer.  The wooden kegs are iced down at the brewery and driven to the Oktoberfest grounds by horse drawn wagons, by lederhosen clad drivers and wenches (or whatever the German term is for them).  The horses seem in no particular hurry.  But just seeing the ice melting over the wooden kegs is enough to whet even the driest thirst.  I just hoped they would drop a keg, and we could all run up and drink all we could before it went down the drain.

A seat inside one of the fourteen tents usually requires a ticket or reservation.  These are held by families for decades, and often passed from father to son.  Unknown to me, we sat down, ordered a beer, and got kicked out.  But not after slurping the liter mug of the best beer I have ever had.  And those busty German Fraus can carry about ten or twelve mugs, without losing a drop!

But a seat in the area outside of the tent is actually better for finding food, meeting young Germans, and starting beer and food fights.  I met three really neat German kids when I was there.  We met every day around 3pm, probably when they sobered up from the previous day.  I actually ended up writing to Hans for many years after, trying to get him to visit me in the U.S.  Anyway, after spending 6 to 8 hours at the Oktoberfest grounds, we took a taxi to their local hangout, and of course, drank some more beer.

The food was equally good and interesting.  My personal favorite was the mackerel and herring (or any white fish) that was barbecued outdoors over hot coals.  After choosing a fish, the monger would wrap it in several layers of newspaper.  Then, back at the drinking table, we would unwrap the fish, eat it down to the bone on the newspaper, and roll up the scraps and bones after.  It was a neat little package.

Of course, we supplemented this with an array of German sausages and brats, along with a huge spiral cut white radish.  It became a favorite as well, and I have never seen it since.  Our favorite spot was the Lowenbrau tent and their beer, a special brew served only at the Oktoberfest.  Their twin lions on their oversized beer bottle would roar on the hour and half hour.  After sundown, the light shows started, and the crowds got bigger.  It was impossible to walk a straight line.  So, we joined hands (with Hans) in a conga line, and followed Hans to various stops on the grounds.  I am sure we upset many a German and his family.

Fortunately, my hostel was back near the Bahnhof, so I could not get lost.  I just had to ask or tell a cab driver to get me to the train station.  Was it Mark Twain that said, “Too bad youth is wasted on the young”?  This was true for me on this particular trip.  Though I had a great time, I did not really delve very deeply into German lore and culture, unless you consider beer to be their Grail.  Perhaps I did find their soul and their hopes and dreams in a liter mug of great beer!

This even should be on your water pail list, even if you don’t drink beer.  It is a great event.  The Germans are so much fun after a few beers!!!